Ketu South’s incoming MCE, Maxwell Koffie Lugudor, has intimated that the statement by the paramount chief of Aflao, Torgbui Adzonugaga Amenya Fiti V, is being used by political parties as propaganda tools.

He averred that the media has played a big role in making the issue one that’s being politicized which should not be so, adding that the paramount chief was referring to Aflao and not Ketu South.

“The media is overblowing the whole thing. I am still surprised Ketu South is being used by some political parties as a propaganda tool. It is not helping Ketu South at all. And I want to let everybody know especially people from Ketu South that, we are not going to sit down to be used as propaganda tool again”.

According to Mr. Lugudor, the paramount chief was rather appealing to government to complete the projects especially the E-blocks and not giving ultimatum to the government as being purported by the media. He stated that it is also inappropriate for people assert that there aren’t enough school infrastructure in Ketu South because they have six senior high schools.

“When the people from Parliament came to him, which I was not aware anyway, he told them that the building is almost completed and thieves are removing things from it. So, he even asked them if they could go back and tell the minister of education that he is pleading that he could let his children go to school, but I think the whole thing was turned upside down to the extent that people are playing political games with it”.

According to Mr. Lugudor the chief’s call came about as a result of some persons stealing from the almost completed classroom blocks since it has not been completed.

Mr. Lugudor, however, indicated that security has been beefed up to protect valuables from being stolen at the project site. He indicated that he has met with the security officials to look at the various security issues and protect every property in the municipality.

Touching on the outstanding needs in terms of infrastructure for Ketu South, he indicated that he is not aware of Ketu South’s infrastructural needs since he hasn’t been officially instated.

“So, I am yet to meet with the people to know what is actually on the ground. So, I don’t have any accurate information to give now”.

He also denied assertions that the paramount chief is at loggerheads with the President, Nana Addo Dankwa Akufo-Addo.

Mr. Lugdor’s explanation follows the President, Nana Addo Dankwa Akufo-Addo’s statement asking the paramount chief of Aflao, Torgbui Adzonugaga Amenya Fiti V, to “complete” the E-blocke project in the area himself if he is concerned about the delay. The President’s comment has since received backlash from a cross section of Ghanaians with some demanding an apology from him. 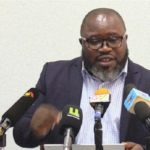 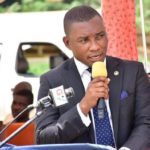 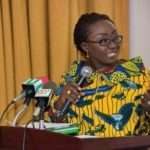 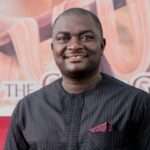